Here is the scenario: You have one month alone on a remote Scottish Island.  You have a comfortable cabin and enough food to last the duration.  The only contact you have with the outside world is a radio.  There is no television, internet access or mobile phone signal.

What will you be working on while you are there?
I’m looking forward to working on my third novel, provisionally titled ‘Phoenix’. I started a version of this book over eighteen months ago and ploughed on through the first draft until last summer, I stalled. From June until September I couldn’t write a thing. I had other exciting things happening, including the launch of my second novel ‘The Piano Player’s Son’ in October, and my flash fiction ‘Dexter’s Lover’ successful in the Fish Publishing competition (which involved a trip to the West Cork Literary Festival for the launch of the anthology!), but the novel refused to budge.

I went on a course called Stuck in the Middle, where it was suggested I might actually have two novels which I was trying to jam into one. Deep down I had a feeling this might be right, but I persevered until January this year when I finally accepted – I had to unpick the two narratives!

I’ve been doing that – as well as vacillating between the two as to which to write first – and I’ve now got started on one of the narratives. I’m enjoying being able to develop the characters and the plot in a way I couldn’t do while they were fighting for space with the other narrative. This retreat will be a wonderful opportunity to make progress.

How will you structure your days?
I imagine I will write in the mornings, walk, explore (possibly have a sleep) in the afternoons, and in the evenings, I’ll listen to the radio, reread the morning’s work and plan the next day’s. Years ago, when my children were small, I rented a tiny cottage just outside Bath for two weeks in order to make progress with a novel. I missed my family – they came to visit the middle weekend – but overall, I found the solitude made me highly productive. My days followed the pattern I’ve outlined above: it worked for me then, and I’m hoping it will again.

How do you feel about being cut off from human contact as well as the social network?
It will be very strange to have no contact with my husband for a month. Is there a postal service, so that we can write to each other? I imagine I will be lonely at times, especially after the first week or so, with no human contact. But that should force me to interact with my characters more. If I’m lonely, I can chat to them! I’m glad there will be a radio, as I think not hearing the human voice for a month would be hard. As for social media, I think the absence of that will be beneficial. When I’ve been on holiday and haven’t had access to the internet, I have a wonderful sense of freedom. It will also prevent me checking emails and Facebook, while I’m supposed to be writing, something I can’t seem to stop myself doing, although it really annoys me.

(Sally: No postal service I’m afraid, this is complete seclusion.)

What reading will you bring with you?
This is a difficult one. I will probably bring a Kindle, but I much prefer print books, so I’ll be lugging an enormously heavy bag. I think my first choice will be a poetry book, something like ‘Being Human’, an anthology from Bloodaxe. If I’m stuck with my prose, I often find some time spent reading poetry will release my stuckness in the way another novel can’t.

It’s hard to decide between modern novels. There are so many, and once I decide on one or two, I’m sure I’d change my mind. A book I read a year or so ago might be interesting to take: ‘The Solitude of Thomas Cave’ by Georgina Harding. It tell the story of a whaler in the 1600s who decides to spend the winter in the Arctic when his ship sails away. It would be fascinating to read it again experiencing my own little bit of solitude. Other than that, it’s going to have to be a fat classic such as ‘War and Peace’. It’s years since I’ve read it, and I’d be interested to see what I think of it now. For a similar reason, I might take the novels of Rosamond Lehmann – oh, and I’ll want a history of the island … no, I must stop!

What essential items will you be packing?
I’d need an anorak, walking boots and a hat for exploring, although I don’t know what season I’m going in. Do I have a choice, Sally? I’d definitely want a powerful torch with lots of batteries. My laptop would be essential. A printer would be nice as well, as I have to read hard copy to edit work, and I’m paranoid about losing it even if it’s backed up. But I’d need someone to carry that lot and I guess I’m not allowed! I’ll take Darjeeling teabags with me, as I drink that all day. If it’s likely to be cold, I’ll need lots of thick jumpers. I hate being cold, and sitting at the computer shivering won’t be much fun. Just had a thought – I’ll take a pair of binoculars. As well as watching the birds and any other wildlife, I’d be able to see anyone approaching, and that would make me feel safer. Or maybe more anxious, depending who it was.

(Sally:  Considering the remoteness of the Scottish islands Lindsay, I think you need to be prepared for all weathers regardless of the season!)

If you could bring a fictional companion with you as a companion, who would it be and why?
Mm! Very difficult. How ‘alive’ would this proposed fictional character be? Would they be there all the time, or could I conjure them up when I wanted a chat? They might get on my nerves after the first day, and it would also break the isolation I’m looking forward to trying out.

It definitely wouldn’t be a man, as that might bring too many complications. But I’m stuck even if it’s a female companion. Do I want someone such as Doris Lessing’s Martha Quest or George Eliot’s Dorothea Brooke, so that I can discuss ideas? Or would characters such as Emma Bovary, or Anna Karenina – victims of romantic love – make more interesting companions? I think I’m going to cheat and take Vanessa from my own novel ‘Unravelling’. Some readers have called her a bad mother; others have wondered how she could have been so besotted with the self-centred Gerald. She usually provokes a lot of reaction! I think I know why she behaves as she does in the novel, but I’d love to ask her how she  thinks and feels about her behaviour and the response of readers to it.

There are some fascinating questions here, Sally, and answering some of them has been a challenge. But I’ve really enjoyed it and thanks for giving me the opportunity. 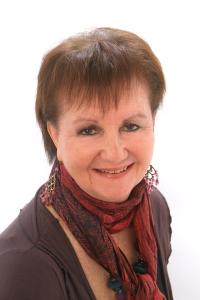 After a career teaching English in further and higher education, Lindsay Stanberry-Flynn, now works as a writer and creative writing tutor. Her second novel The Piano Player’s Son was published in 2013 by Cinnamon Press after winning their novel writing award. Her first novel, Unravelling, published in 2010, has won several prizes. Lindsay is working on her next novel, Phoenix. She has an MA in Creative Writing from Bath Spa University.
Lindsay also writes short stories and flash fiction which have been published and successful in competitions.