Malorie Blackman has been appointed as the new Waterstones Children’s Laureate, a two year post that 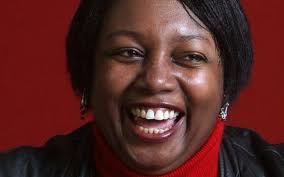 will see her banging the drum for children’s literature, with a special focus on encouraging reading throughout the age groups.

One of Blackman’s best known works is the Noughts and Crosses trilogy, set in a dystopian world where the hierarchy of races has been swapped.  The Crosses are black skinned and the dominant force in society, running government, business and other positions of responsibility.  The white skinned Noughts are second class citizens, forced to take servile roles with few rights and little control over their own lives.

This world is utterly convincing and Blackman writes about her two main characters, Callum and Sephy, in a way that makes the reader fear for their safety from the very start.  But what really works for me are the little details that bring this world into stark focus.

For example, if a white character cuts himself, the plaster he has to use will be black because that is the colour of the majority.  This situation in reverse happened to Blackman herself, and I can only imagine how this type of seemingly commonplace occurrance would feel, undermining a person’s place in society on a daily basis.

This is what literature has the power to do, with the strongest messages not necessarily coming from someone on a soapbox shouting slogans.  Instead, Blackman takes the time to show an alternative viewpoint.  The truthful reality she portrays is what has the power to change minds, which is why she is such an exciting appointment for children’s laureate.

In her interview with the Sunday Times last week, she talked about what she hopes to achieve.  Her main mission is to ensure every primary school child has a library card and is read to for ten minutes every day.  You would think this is an achievable target, but with libraries closing on a regular basis and the school curriculum ever more test focused (even at primary school level) it could be harder than you think.  She also wants to use a variety of media to encourage children’s interaction with stories, including film, music, and art, as well as supporting the use of ereaders.

Now, being the relative Luddite that I am, I am constantly playing catch-up with the various platforms available nowadays.  I have to remind myself that children have grown up with this technology, so they don’t have the same learning barriers as me and feel comfortable reading from a screen.  I’m sure there will be the usual cries of indignation if children are not reading conventional books, but hopefully the more they have available to them, the more they will be prepared to experiment with what they are reading, whether that’s comics or graphic novels, short stories or poetry.  I don’t care if they read on paper or on a screen.  I just care that they’re reading.

A statistic that Blackman quotes in the interview is that ‘17% of young people would be embarrassed to be seen reading by a friend’.  But that means 83% of young people wouldn’t, which is a far more encouraging number, and I have high hopes that Blackman’s passion for literature and interest in new technologies will make this percentage even higher.